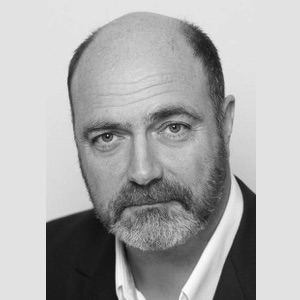 Half Scots, half English, and marginally eccentric, James/Cameron is first and foremost an actor, but also a qualified homeopath and naturopathic nutritionist, poet and editor/author of his grandfather’s WW1 memoirs (A Very Unimportant Officer, Hodder 2008). Theatre credits range widely from Frank-n-Furter in The Rocky Horror Show to Thenadier in Les Miserables, the poet Philip Larkin in Larkin with Women (Best Actor nominee, MEN Theatre Awards 2005) and even his own grandfather in his acclaimed one-man show based on the memoirs above – My Grandfather’s Great War (The Stage Best Solo Performer Edinburgh 2008 nomination). Television and film include London’s Burning, Eastenders, Coronation Street, Emmerdale, Holby City, Taggart, Dragonworld, Flying Blind et al. He is frequently to be heard on BBC Radio 4, is a regular presenter on The Economist podcast and has a sizable oeuvre of audiobooks available on iTunes and elsewhere on the net. He’s also a hot-air balloon pilot.