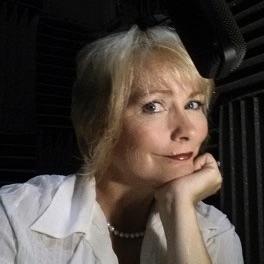 Ann M. Richardson was raised in the midwest, where she was active in drama and singing throughout her young-adulthood. Ann’s varied work experience has lent itself well to narration, as she’s no stranger to terminology used in wildlife management, veterinary medicine, pharmacy, education and the automotive industry. In addition to that, her regular travels to Sweden (her father’s homeland) have enabled her to pick up the Swedish language. Ann is a devoted volunteer for Learning Ally (formerly Recording For the Blind and Dyslexic), where she has become adept at describing diagrams, charts, illustrations and photographs. This honed her strength in narration non-fiction. However, Ann’s passion is narrating well-written fiction with plot twists; even better if there’s humor included. She has been described as having a distinctly smooth and friendly voice that surprisingly has no trouble digging into gritty characters. When she’s not narrating, Ann enjoys family time, running half-marathons, going fishing, painting pet portraits or scrubbing dog slobber off her walls. (She has 2 French mastiffs. Enough said.)