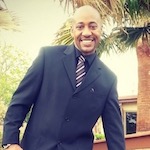 “If you want to hide something from most people, put it in a book!” Famous words told to a very young Otis by his grandfather. That began the spark and later became the inspiration for a lifelong love affair with reading.

Always the curious chap, Otis was most often seen walking around town or school with a paperback poking out of his back pocket like an old man with a wallet too big for his trousers or a rolled up comic book clutched between his hands as he ran throughout the neighborhood with his friends. Never limiting himself to one subject or genre, Otis devoured books encompassing a wide variety of subjects and disciplines. As a young man, while working his way through college as an editorial assistant for a music trade company, as well as stints as a production/writer’s assistant for a couple of syndicated television sitcoms, Otis developed a fondness for music, poetry/spoken word and performance art. Ever eager to learn all aspects of interested disciplines, Otis began to write, record, as well as perform his “art” in its many forms. He also began recording and engineering projects for other budding artists and performers. During this time Otis began his career in education, spending the next fifteen plus years with the Los Angeles Unified School District, working in the special education department, facilitating and supplementing the education of children with severe learning disabilities, autism and mental retardation. Patience, discipline and attention to fine detail are just some of the many skills Otis honed while working with such a diverse student population. Along the way Otis became a husband and later a father. Still reading and ever expanding his informational base, Otis and his wife decided that it was time for a major change in life’s direction. They both took an early retirement, sold all their belongings and along with their three-year-old daughter, packed up and moved out of the United States in early 2015 and relocated to South America in search of the “simple life”. They bought a piece of land, built themselves a home and a charming rental property, had another child and started anew. Homeschooling, homesteading and organic gardening now encompass the bulk of most days. There is now plenty of time for sunshine, love, family and books.