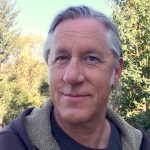 Mark has been editing and producing spoken word recordings for over 20 years. From his recording studio in southern Oregon, Bluejay Productions, Mark has produced many voice recordings for audio books, radio and television, and online streaming, as well as music recordings.

He holds a B.A. in Music and Recording Arts from California State University, Chico. Editing for Bee Audio offers him a nice break from the grind of recording and producing prima
donna rock stars and heady folk singer-songwriters. Mark also works as a monitor and front-of-house engineer for music and theater performances. In his free time, Mark enjoys hiking, camping, kayaking, rockhounding and performing as a keyboardist and singer.