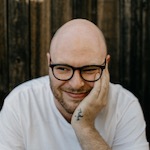 Dominic has been working in audio and music production since 2010 when he finished a program at the Conservatory of Recording Arts and Sciences in Phoenix, AZ. He then went to Chicago, Nashville, New York, and Los Angeles working in various recording studios and developing his tastes and craft.

Currently living in Portland, OR, Dominic continues his work in audio and music production at a private studio working with clients locally, regionally, and internationally. The focus in all his work is to honor the writers and performers of whatever project he’s involved with, put simply, if the people working are well taken care of, the work takes care of itself. When not sitting between a pair of speakers, Dominic can be found in the kitchen trying to perfect any and all gluten-free recipes for his girlfriend, or with a wrench and a furrowed brow while working on his moped.